While Binance is slowing becoming one of the most important names in the cryptocurrency industry, its native token, Binance Coin, is also gaining a lot of traction and interest this year. One of the market’s top performers in 2020, Binance Coin has flipped its objective as just an alternative to avoid transaction fees.

Binance Coin, since 1 January 2020, has noted an impressive growth rate of 127%. However, if calculated from the bottom on 13 March, the ascent is as significant as $377.8%. That is extremely impressive for a token that is exchange-centric. After recording an ATH of $33.38 last month, it is fair to say that it might be on its way to another high, before the end of 2020.

While the crypto-asset has done well on its own, its presence is slowly being felt by the rest of the space too. In fact, BNB’s on-chain metrics are indicative of its correlation with the rest of the market, including Bitcoin. 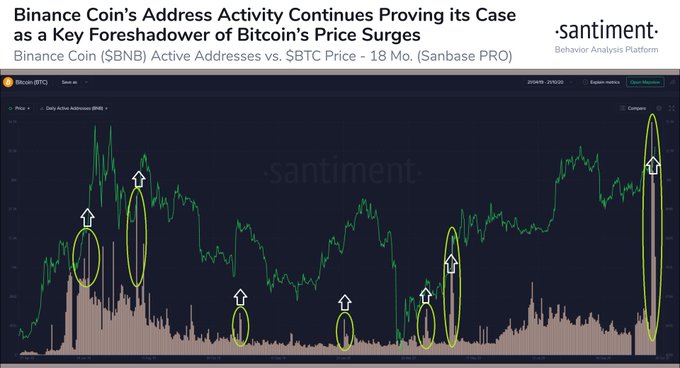 According to Santiment, BNB’s active addresses recently registered an uptick, following which, assets correlated to BNB exhibited a bullish rally. Bitcoin is one of the prime examples, and the interesting thing is such a correlation is not limited to one year alone.

The attached chart dates back to the start of April 2019, and a prominent spike in BTC’s prices was correlated with a rise in BNB’s daily active addresses. According to Santiment,

Why are Bitcoin and BNB increasingly getting correlated?

READ  Lack of protective equipment to protect the corona virus can be fatal: WHO

Stemming down to the most technical reason, it is possibly due to Binance Coin’s quarterly burning. When Binance Coin was first launched, its supply was 200 million. At the moment, it is close to 150 million. Only last week, BNB concluded its 13th quarterly burn, wherein a total of 2,253,888 BNBs worth close to $68 million were burned.

The burning process will be followed until the total supply gets to 100 million, largely drawing parallels to Bitcoin’s own scarcity functionality.

While 100 million for BNB and 21 million for BTC is still quite off in terms of supply, the market cap is expected to be closer in the future, as BNB’s price rises.

Bottom line, “by reducing the number of tokens in circulation, the value of the remaining tokens naturally goes up due to supply and demand economics (assuming the demand remains constant).” Both assets have largely followed the same logic.

Hence, the increasing correlation makes sense from a fundamental point of view.

That’s not all, however, as recent reports have indicated that traders are taking notice of BNB as Binance Coin has made its way into several notable portfolios in 2020. After Bitcoin and Ethereum, Binance Coin is the most picked crypto-asset this year, further verifying its growing presence in the industry. While the markets remain uncertain until the next rally, Binance Coin is putting itself in a profitable position.

Has Binance Coin paved for itself a profitable position? was last modified: October 23rd, 2020 by Linda Hopkins

Thalía's grandmother is in delicate health

Linda is one of the oldest contributors to Sunriseread. She has a unique perspective with regards to business and technology. She aims to empower the readers with the delivery of well-written news pieces, and most importantly, she always tries to bring the news quicker to the readers.